Paintings shown at the Arts Centre in the recent show devoted to the work of Michael Armstrong were a timely reminder of a fascinating figure in Jersey's cultural life over the last four decades of the twentieth century.

Michael, who died in 2000, was poet and artist by inclination though he worked variously as a librarian, hotelier, restaurateur and - perhaps most surprisingly -  a member of the mammals staff at Jersey Zoo.  He is best known artistically as a poet whose work was set to music by the composer William Alwyn, but the exhibition of watercolours, gouaches, oils and mixed media work spoke of a man always looking to experiment and find new ways of self-expression on paper and canvas. 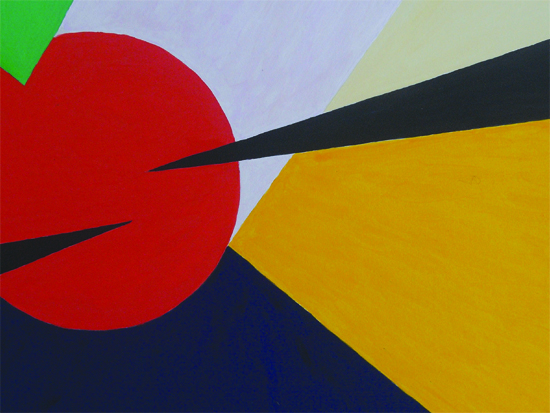 It contained constructivist images where shapes are yoked boldly into alignment, experiments in minimalism, a particularly effective collage and a series of works which explore organic form - they might be inspired by the natural world viewed under a microscope, the mark-making giving the illusion of amoeba moving across the picture surface.  Perhaps the very variety gives a clue to the reason Michael never quite established himself as a painter in the way that other contemporaries in Jersey did: his style, or perhaps one should say styles, were eclectic in a way that suggested exploration rather than arrival. But the exhibition also included a welcome reminder of his influence in the form of photographs of a solo show he had in the Arts Centre in 1993.

His work has a joie de vivre entirely characteristic of a man remembered by the warmth of his smile and his entirely unassuming personality.  He was diffident, retiring you would say, so that it was a surprise to discover that he spent the final months of the Second World War in bloody conflict in the mountains of Italy. The experience inspired poems, two of which were later included in the second volume of the Dent Everyman collection of World War Two Poetry.

By coincidence, the volume's editor, former BBC Radio journalist Erik de Mauny, later appeared at the Arts Centre to give a reading from the volume. Michael was far too modest to make his connection known but it emerged in the q&a which followed the reading in an amusing exchange which, as I remember, went something like this:

Voice from the audience (Michael):  Could I ask why you decided to print the lines by Michael Armstrong as two separate poems rather than one single piece?

EdeM:  I think it's pretty clear from the meaning that they are actually two separate works, so I wanted to make that obvious in their presentation.  I separated them and gave the second one its own distinct identity.

Michael:  Actually, I'm not sure that that's necessarily right.

EdeM:  Oh really, why do you say that?

Michael:  Because I wrote it!

From anyone else it might have been confrontational but Michael was entirely charming about it, adding that anyone might have made the same assumption.

Michael Armstrong made an important contribution to the artistic life of the Island, chairing the Barreau Arts Committee and publishing the work of other writers - notably Jeremy Reed - for the Andium Press which he established.  His own Collected Poems (1961-96) were published in 1997 by the University of Salzburg.  The exhibition curated by Graham Tovey captured something of that contribution and his infectious enthusiasm for the arts.