Lots to take away from the Jersey premiere of Michael Pearce's film Beast at Cineworld on 25 April.  First - and most obviously if you weren't there for the festivities -  you shouldn't miss the opportunity to catch the film in Jersey  between 27 April and 3 May, when it's on general release.

An engrossing, if unsettling film, it has its roots in the 'Beast of Jersey' story that was recent history for Michael Pearce growing-up here but a childhood memory for those of us of an older generation.  While the film presupposes no knowledge of those dark events, it uses the idea that evil can as easily be visited on a small community as a large one - albeit that it seems the more incongruous in a small one - to probe the darker side of humanity.

Here the tale of a contemporary serial killer is given an unusual twist by the fact that he - or perhaps even she - is never unambiguously identified but explored via the story of a (very) dangerous liaison between the two central characters, Mollie (Jessie Buckley) and Pascal (Johnny Flynn).

The Guardian, not the only national to give the film an enthusiastic reception, noted that while "the title...might appear to promise horror or melodrama and there is a little of both...there is always something subtler going on".  That subtlety certainly owes much to the powerful and complex performances of the two lead characters who explore the tension between appearance and deeper psychological motivation to hypnotic effect at times.

Another source of the subtlety, especially for those of us who share the Director's Island upbringing, is Jersey itself.  It emerges - as was intelligently pointed out in the Q&A which followed the screening - as another character in the film, exerting a powerful influence on the drama. It's beautiful certainly but also starkly disturbing in its elemental and sublime power.  No shots of Gorey Castle or Jersey cows here, as Michael Pearce amusingly pointed out afterwards!

Partly, the rugged coastline, the rolling seas and the soft-focus dunes of St Peter and St Ouen act as a kind of metaphor for the psychological states of the central characters but nature, red in tooth and claw, also provides a physical refuge for them, the antithesis of the tedious birthday party from which Mollie escapes to set the plot in motion. The Island which she explores is one in which natural beauty carries the associated threat of emotional alienation and indifference to human society.  It would be remiss not to draw attention to the very imaginative filming which helps create this undertone running through the film.

Questions from the floor at the premiere, and those of host Tom Dingle from ArtHouse Jersey, allowed the Director to give an insight into the film and its genesis which you can't always rely on in such circumstances.  Michael's own ambivalence to the Island, a place of powerful childhood memory yet also one from which artistic escape was necessary, provided a further interesting dimension to the discussion about setting.

But there's something more general to underline here: the value of mechanisms to support creative people like Michael Pearce.  A successful film requires not only a number of immediate funding sources to meet production and post-production costs but it also needs the input of a creative individual whose growth has been nurtured at an earlier stage in his career.

We heard that several years ago Michael received funding from the Jersey Arts Trust - now ArtHouse Jersey - to hone his script-writing skills. Such support rarely brings immediate 'return on investment' but if provided to the right people, in the right way and at the right time, can help to unlock their creativity and lead to events like Beast's premiere which then create a buzz for the rest of us.

Of course, the 'if' is the challenge there.  A funding organisation has to have not just the wherewithal but also the ability to make the right choices and place its confidence in the right people.  So we're very lucky there at the moment... 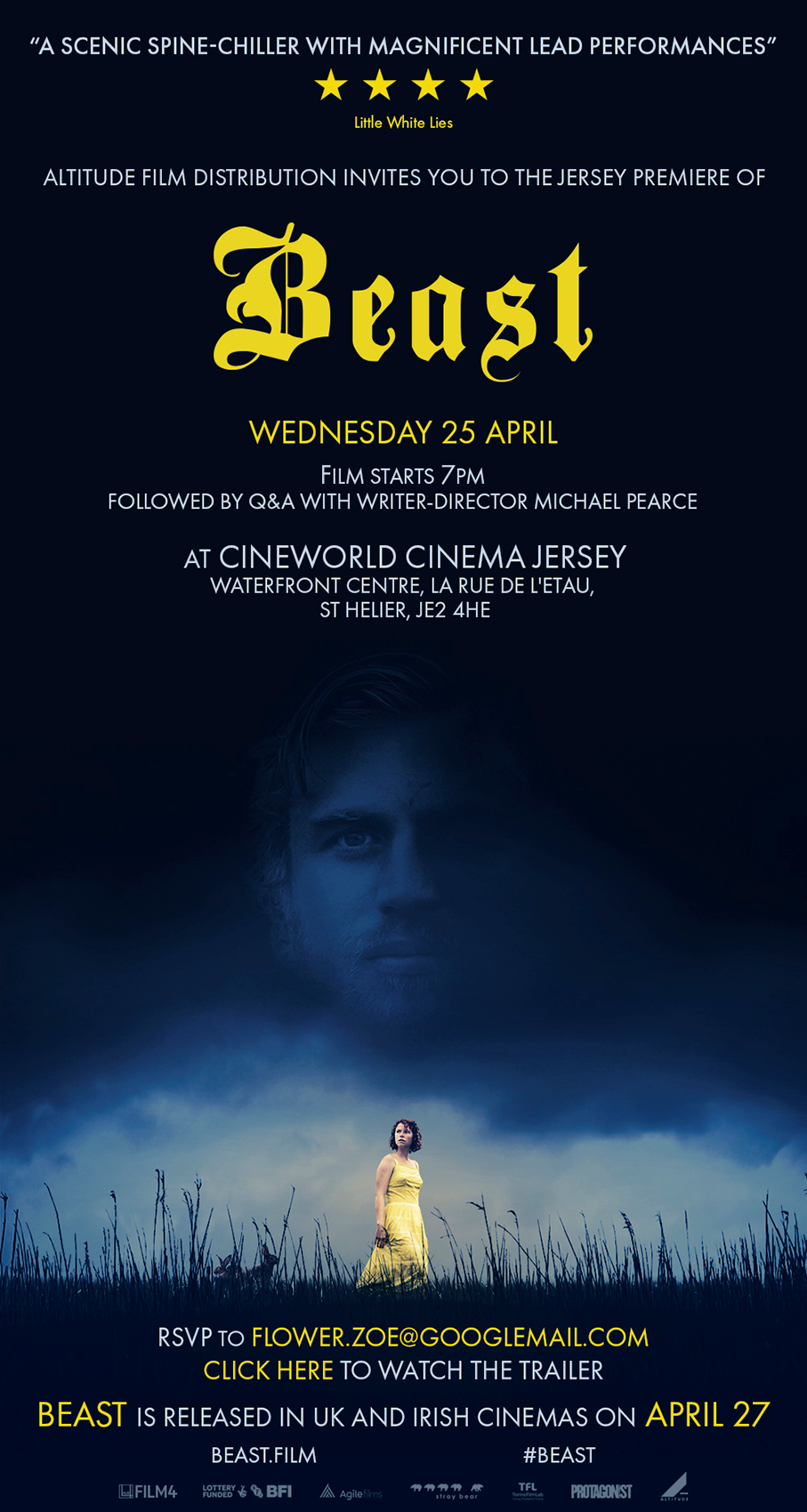