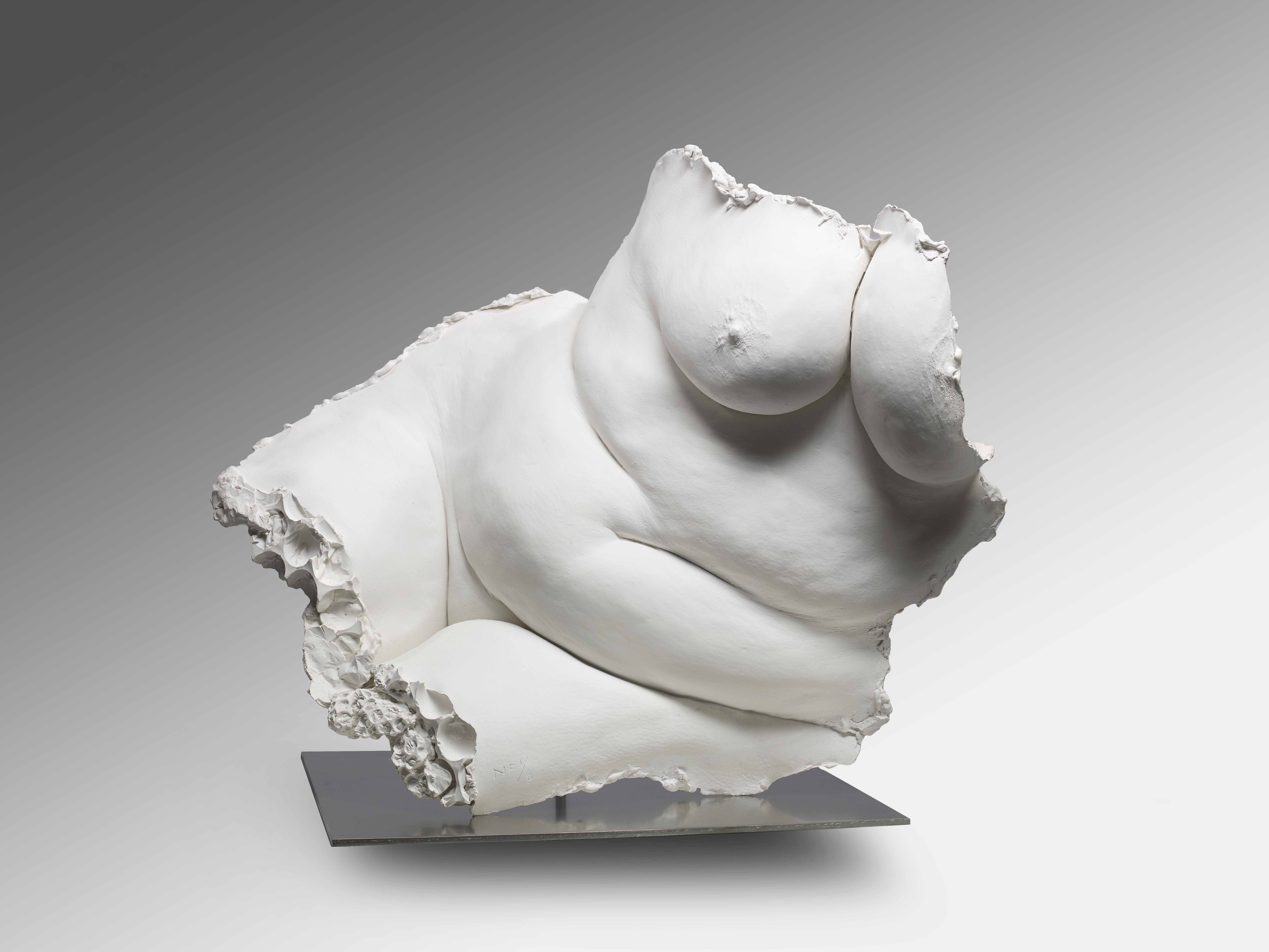 Monday to Friday and by appointment

An exhibition of sculpture by Nicole Farhi, legendary designer and artist. Nicole has made studies of the body, focusing on the hands in movement during dance, as well as observing the details and folds of the body. The exhibition has been generously sponsored by UBS.

Tickets for the discussion are limited, cost £32.00 and include a drink with the artist. Tickets should be booked from the gallery in advance to avoid disappointment. 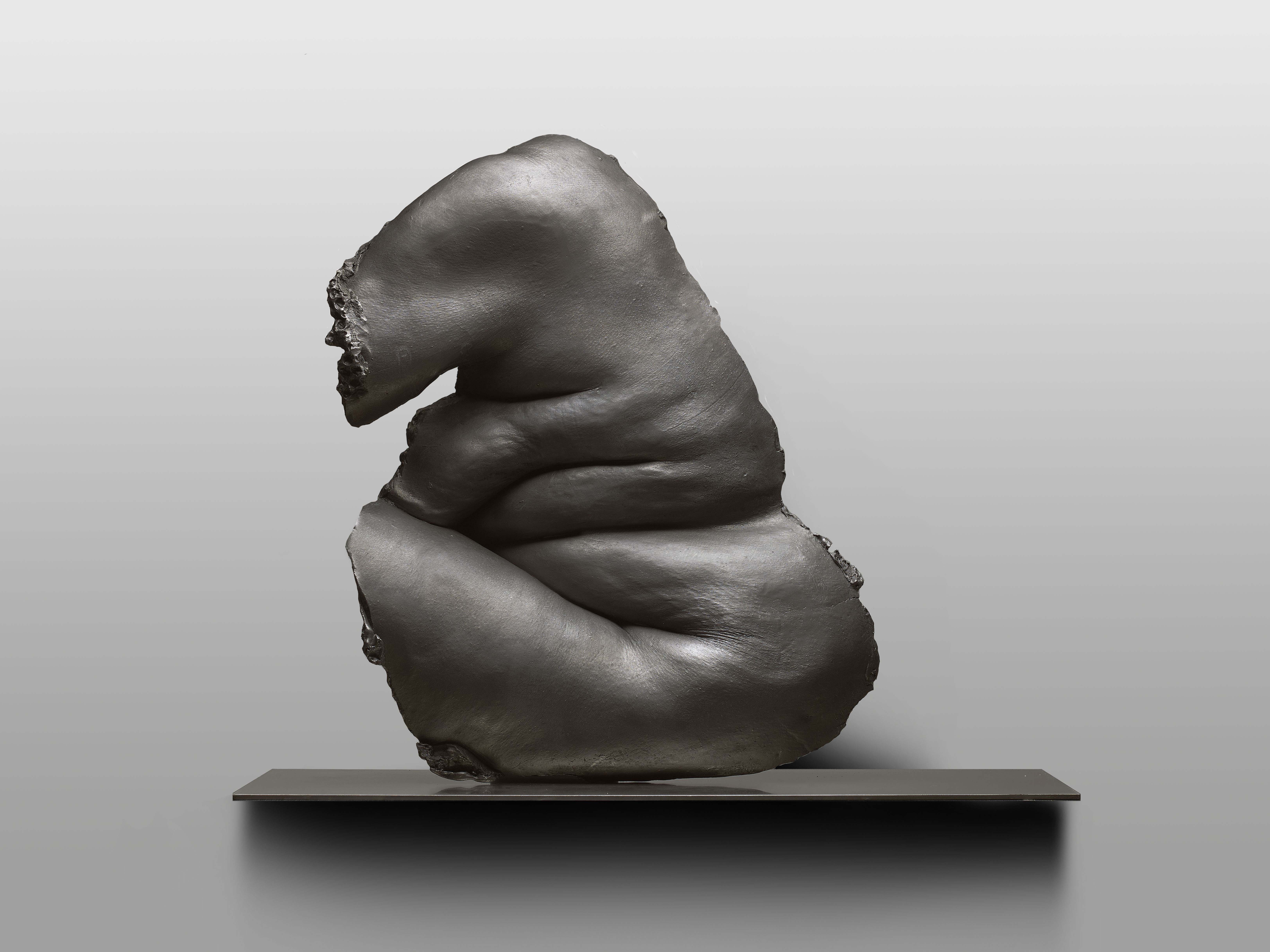 'The work is about forms, human forms, and the infinite landscape of the body'  Nicole Farhi

Nicole Farhi first gained public recognition in the '80s as a fashion designer. She created her eponymous label in 1982 and went on to win the British Fashion Award for Best Contemporay Designer 3 years in a row.

She was first drawn to sculpture during visits to the Foundation Maeght in Saint-Paul de Vence where she saw work by Alberto Giacometti. 'I was totally struck' she recalls 'by one of his early sculptures called 'Woman with Her Throat Cut... it's probably his vision of the human condition, it's extremely painful and it had an incredible impact on me'. When Farhi eventually took up sculpting she says: 'it all came from that piece of sculpture'.

The sculptor, Jean Gibson, taught Farhi during the early 1980s. However, it was Eduardo Paolozzi who triggered her full-scale pursuit of sculpture. They met during the mid '80s at the Royal College of Art's foundry on Queen's Gate where Farhi had gone to cast her first sculture in bronze. Paolozzi became her friend and mentor. 'He came for dinner almost once a week. He would invariably arrive loaded with plaster casts - little animals from his 'Noah's Ark, 'plaster heads of famous inventors'. Paolozzi died in 2005. The 3 bronze studies of Eduardo Paolozzi in the exhibition are full of energy and emotion.

Paolozzi had huge hands. They were strong with chubby yet nibble fingers capable of delicate movements. Farhi made a series of sculptures to commemorate them. After her first portrait exhibition at Bowman Sculpture in 2014, she began to make further studies of friends and aquaintances, concentrating just on their hands. 'I was drawn to the idea of sculpting the hand because it represented such a huge challenge. From the beginning of mankind, the first marks left on the walls were made by the human hand. 'Besides their facial movements, people's hands are the most expressive part of the body. In many cases their gestures are instinctive and spontaneous, which lends them great charm. We shall be showcasing Nicole's hand sculptures of Prima Ballerinas and dancer Ed Watson, Lauren Cuthbertson and Marianela Nunez alongside limited edition prints by Walter van Dyk.

Whilst working on ‘The Human Hand’ series, Nicole was already developing ideas for next body of work’ ‘… I wanted to continue looking at parts of the human body; this time exploring the powerful beauty of flesh, curves, and the sexual energy large women have’. Nicole worked with different models including Sue Tilley or ‘Big Sue’, Lucian Freud’s life model for ‘Benefits Supervisor Sleeping’ on this next development. The models were first photographed in a comfortable pose, Farhi then worked on the photographs, cutting them up, drawing on them and blowing up sections until she was happy with the composition. For the next stage Farhi smoothed wet alginate directly onto the skin of her models, followed by positioning bubblewrap to create an edge to hold this in place. The set alginate was covered with strips of plaster bandages to reinforce the cast before lifting it off the body. The negative part of the cast is then filled with plaster and left to cure for a few days. Instead of creating a sharp edge, Nicole let the dimpled bubblewrap’s texture reveal itself next to the more subtle silky finish of the human skin, adding expressive drama to the contour. 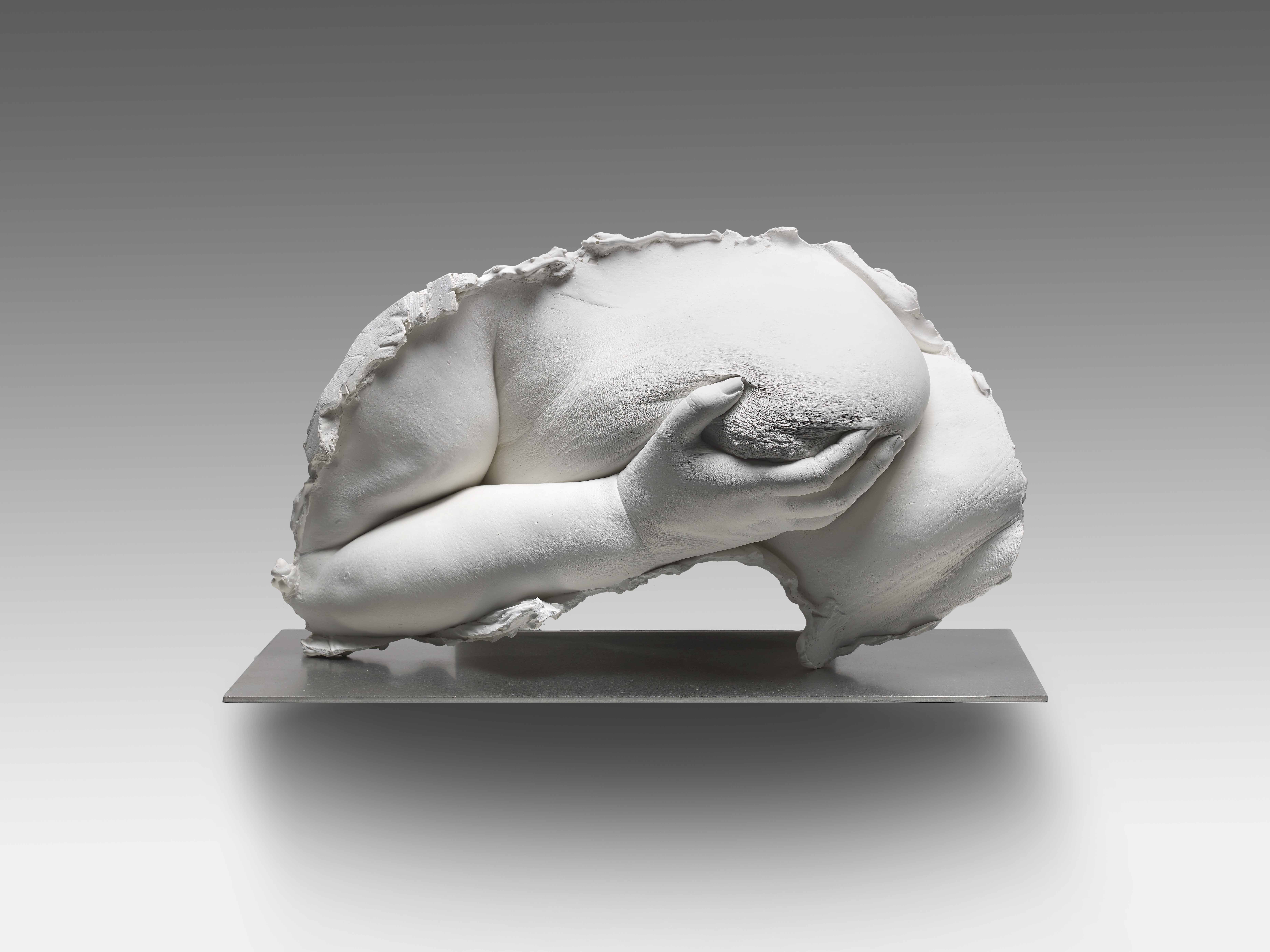 Once the negative moulds were made, Farhi had to decide what material to make the sculpture in. Already familiar with the subtleties of bronze, Farhi has chosen to have 4 of these cast in bronze, with a dramatic matt black graphite patina. She also began working in white Jesmonite, a type of reinforced plaster that has a capacity to pick up the delicate textures of skin, lending the work an aura of purity and calm.

The first sculpture she made using this method, Gaia, is one of the most arresting in it’s simplicity and strength. A major proportion of the earliest works of world sculpture are goddess figures. As the Folds series grew, Farhi realised that she was making work that referenced these. She explains ‘each fragment is named after a Greek or Roman Goddess. Something in my work reminded me of the beginning of humanity. I looked into Greek mythology and found the similarities between those sensual powerful deities and my earthly goddesses’. Perhaps the most minimal piece is that of Juno, Roman Goddess of the Gods. In her role as Queen, she kept special watch over all aspects of woman’s lives, particularly the protector of women in confinement. Farhi presents her lying peacefully on her side, as though empathising with the pregnant women she cares for. 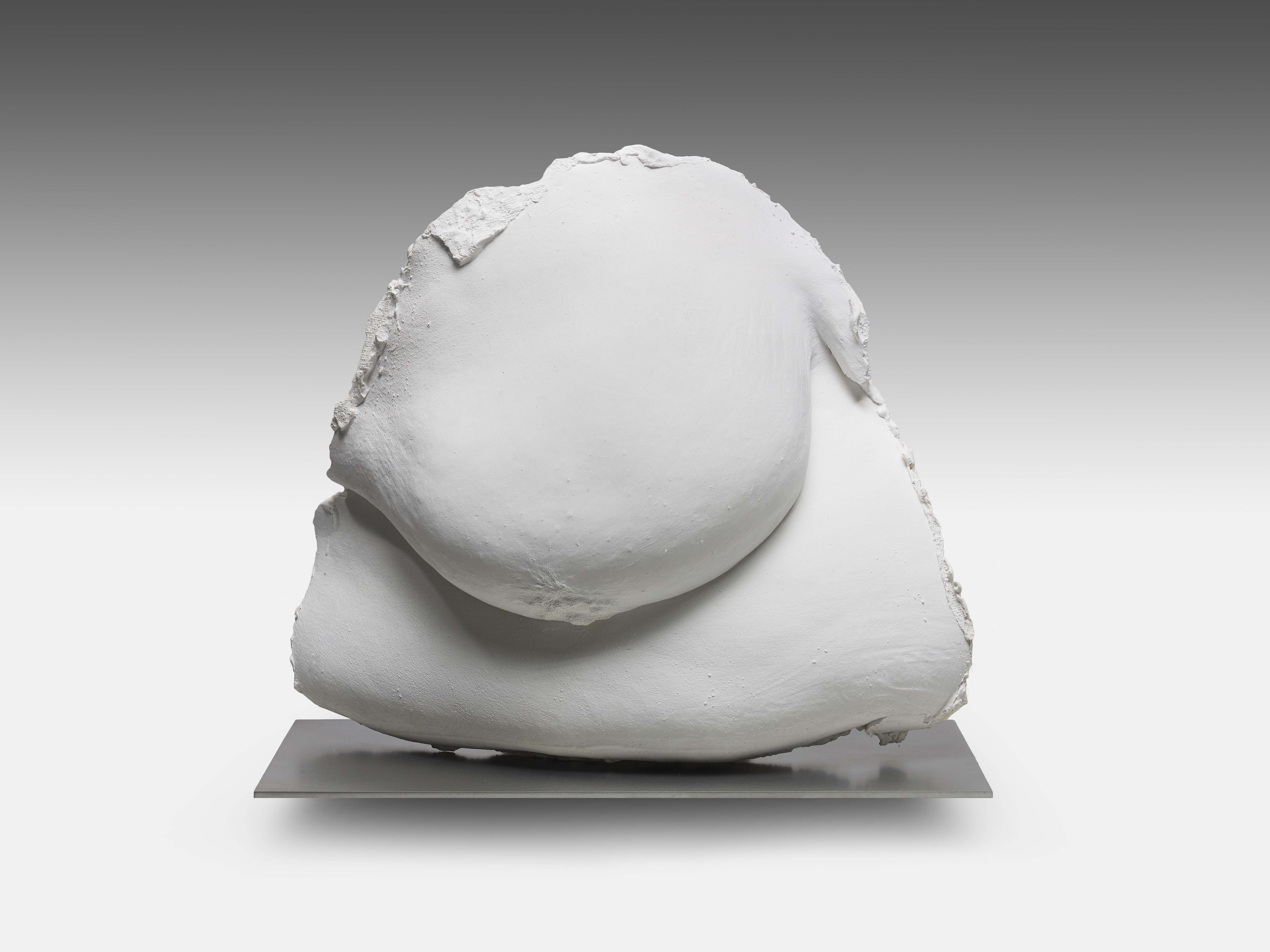 Reg Gadney, Senior Tutor at the Royal College of Art for 15 years observed ’ Rilke said of Rodin that he had an unerring knowledge of the human body. From the start of her career as a designer and sculptor, Nicole Farhi has shown an essential unerring knowledge of the human body’. I would add, that as a woman, I feel touched by the evident kindness and empathy shown to her sitters and the female form and feel privileged to be bringing this work to a Jersey audience.

The exhibition runs from 28 November until 31 January and has been made possible by the generous sponsorship of UBS. 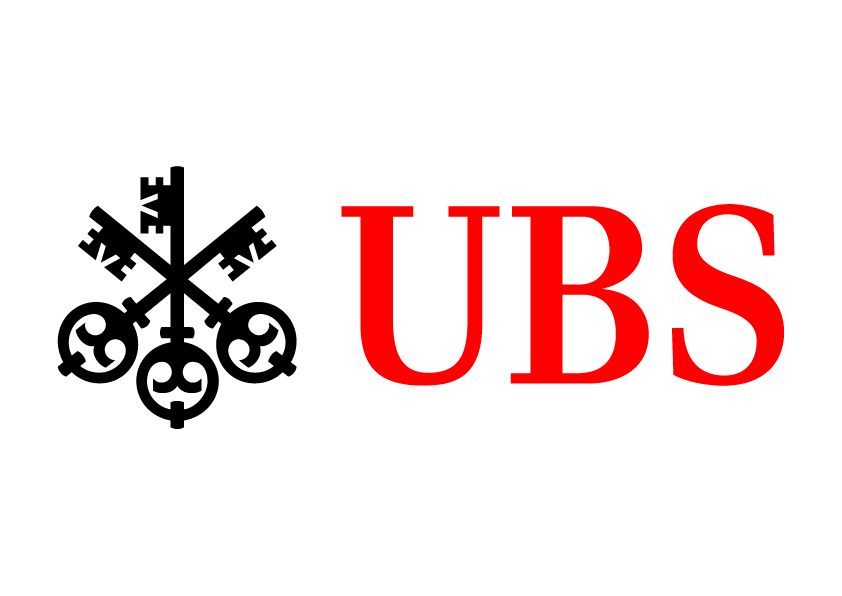